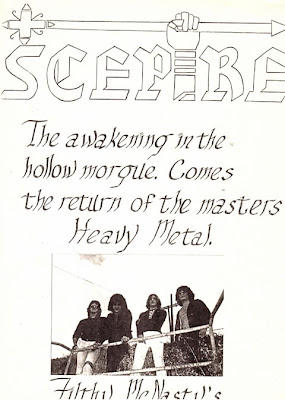 What a great scene existed in L.A at the early/mid '80s! Yes, two scenes existed next to each other, the glam/hair one and the thrash/speed/power one. As for the thrash/speed scene, a lot of bands started at the early '80s such as Slayer, Shellshock (later became Dark Angel), Metallica, Abattoir etc. and it succeeded in doing a name for themselves, why their "brothers", such as Vermin or Sceptre remained on an underground level and were liked and supported only by a couple of fans. I have to notice, that my all time favourite singer John Cyriis started its career in this band. Phil Sardo told me everything...